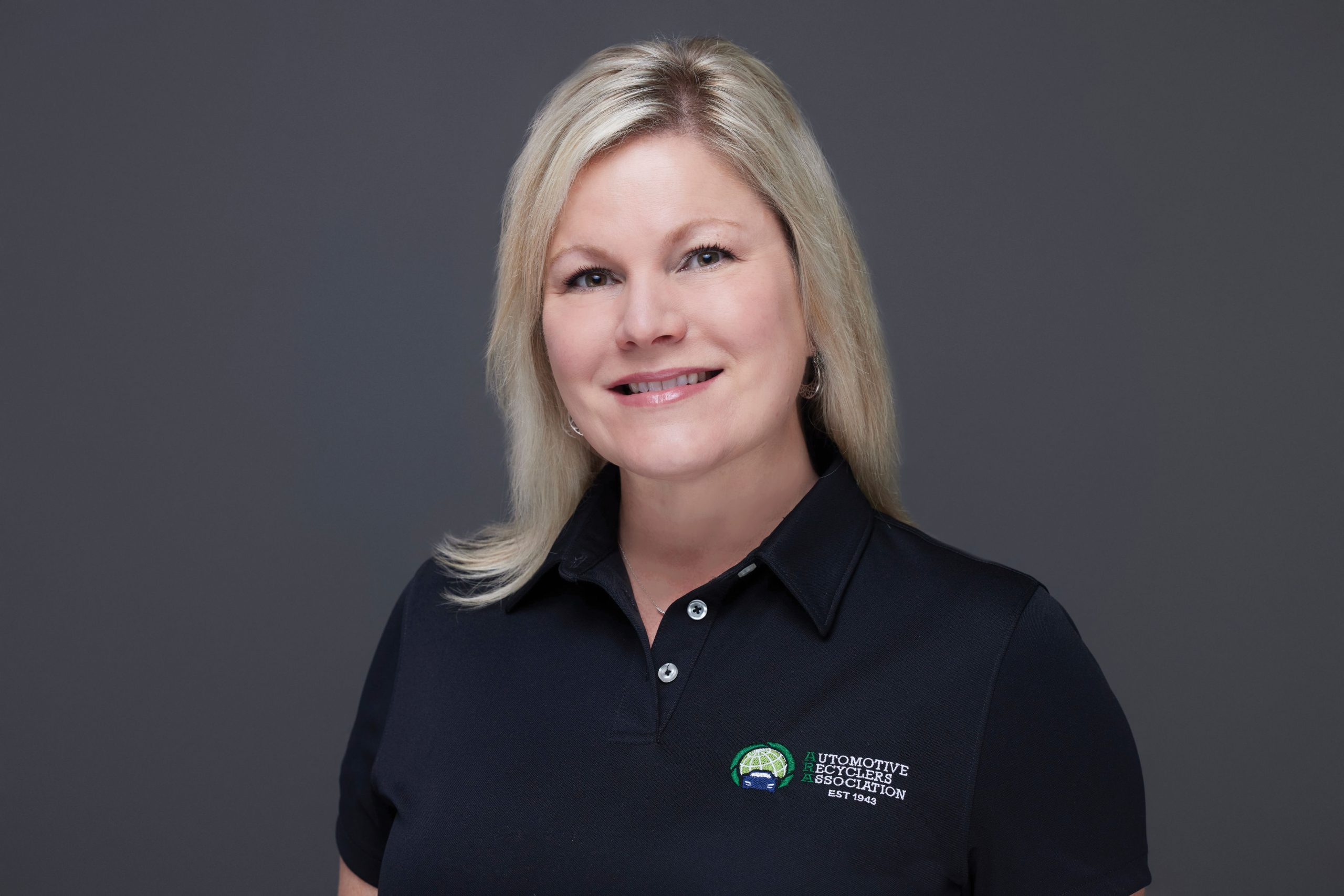 The significance of the gavel passing at the 79th Annual ARA Convention & Expo is not to be missed. Shan Lathem takes on the role as ARA President, as only the fourth woman in the association’s 79-year history.

To know Shan Lathem is to know a strong, capable, and dependable leader in her role as owner of Cocoa Auto Salvage in beautiful Cocoa, Florida, running her family-owned business for many years now. It is quite coincidental – but very appropriate – that she will take on ARA’s executive committee presidential role this annual convention held in her home state.

Lathem was raised in her family’s automotive recycling business, started by her parents Doug and Linda Lathem in 1979. It began, really, in 1970 as the business morphed from the original gas station with repair bay, to include a convenience store and deli, then the addition of a large towing business (the largest towing company in the county at the time it was sold). Doug would repair cars during the day and run the wrecker at night, while Linda kept the books at night after her full-time job at Coca-Cola, while also caring for two small children. Then, in 1979 they ventured into automotive recycling on a few acres and with two employees, mainly to provide locals a cheaper way to repair their cars. Today, the recycling business is on approximately 28 acres that supports two facilities – both a full-service facility and a self-service facility sharing a location but separated by fencing – and has 19 total employees.

Over the years, her passion for the business made her the choice to take the business to the next level as its next leader. From there, her passion extended into volunteer service, as she stepped into industry service in her state affiliate, the Florida Auto Dismantlers and Recyclers Association (FADRA), as a Board of Director 10 years ago. She rose to President in 2018 and continues to serve on its board. She also has served as an original RCD board member (RCD), a trading group. Until she accepted the role of ARA Secretary, she served as a Director of the Automotive Recyclers Association for three years, to be counted on whenever the need arose.

When Lathem was first asked to serve on ARA’s Executive Committee three years ago, she said, “People have asked me why I would want to make the sacrifice of time and resources to make the five-year commitment. That question always surprises me. If not me, then who? It must be one of us that is nominated each year and I wholeheartedly believe that this is an important job that must be done for our industry, for our businesses, for our employees, for our families. I love what I do and I’m proud of what we do as an industry. Recyclers must have a voice and it’s the volunteers that give that voice to our association. I am proud and humbled to have been asked to have a seat at the table.”

After having that seat for several years now – as only the fourth woman on ARA’s EC, and following in the footsteps of women automotive recyclers Ginny Whelan, Sandy Blalock and Linda Pitman – we caught up with Lathem to discuss the industry, the focus of the executive committee, and where she sees the industry headed, having now had a bird’s eye view for a significant amount of time.

When you joined the ARA Executive Committee, how did it differ from being on your state association board, and serving as its president? Any differences or similarities to note?

At the national level there’s just so much more going on, it’s much busier. The EC tries to divide and conquer when needed so that we can have a presence anywhere automotive recyclers need to be represented. I think in years past, the President would do all of the traveling.

We split it up amongst us, which is so helpful for recyclers like myself that are still hands on, in the trenches of the day to day. We still have businesses to run! Communication seems easier at the state level. It’s easier to communicate with the entire Board and keep them up to speed on what’s happening. That has been a challenge at the national level – trying to make sure the Board feels in the know and confident of what leadership is working on. This is definitely something I want to continue working on this year. Communication is key.

Addressing the elephant in the room, how was it being a woman national executive committee member? What challenges, progress or stories can you share relating to the dynamics of the board or from fellow ARA members?

I don’t feel as though I’ve had any external challenges because I’m a woman working in a “man’s world.” I’ve never been treated in any way that I felt like anything other than one of the guys and I really think that is how they think of me. If anyone has ever had any issue with it I have never known. I think as women we have more internal challenges in general – am I good enough? Can I do it?

I remember when I was on the Board, before the EC. I never really talked about my lack of knowledge when it comes to auto parts, I’m just not that woman, and it used to really bother me. I sell parts for a living and don’t know the first thing about them – lol. Then David Gold and Jono Morrow were standing around, having a conversation that I walked into. I said, “Hey, what’s going on?” to which Jono replied, “David is explaining to me how a transmission works.”

That was the moment I let my insecurity about not knowing parts go. Maybe he was kidding, maybe he wasn’t. Either way, thanks, Jono!

What have you enjoyed in being a part of the EC? Why should anyone, men or women, think about serving a larger role in their state or national association?

I have been able to form life-long friendships with people from all over the country. I get the opportunity to learn from the best of the best. I would not have had the opportunity to know them if I was not on the EC. Those relationships have really enriched my professional and personal life. It always comes back to the relationship. Who you know can make a difference. This is one reason why I encourage everyone to get involved, at your state level or national. Volunteer for a committee – whatever time you give will give so much more back to you and your operation.  There is definitely work to be done but everyone knows recyclers are fun to hang around with – I see you all at the bar at convention.

From when you joined the EC to today, what changes in the industry have you seen? What accomplishments have you all made as a team?

We knew the electrification of vehicles was coming and that’s why we pushed for the Certification Committee to get the EV module in place for auto recyclers to keep their employees safe and informed. It seems ludicrous to think that some OEs are going to stop the production of ICE vehicles in the next several years and move to 100% electric, but that’s what they say. Is this going to happen? from a realistic perspective it really doesn’t seem that it will happen as quickly as they predict. Automotive recyclers typically excel when faced with challenges. We figure it out. ARA is making sure that we are at the table for all these discussions. We will not be cut out or left out, not on our watch.

What is the current focus and emphasis of the executive committee initiatives for your year as President, and going forward in the future? What is your perspective on the future of certification and the industry?

The CAR program is very important. Over the last couple of years, the committee worked diligently to revise and update the platform. ARA’s CAR program is being used as a guide for NEMA’s protocol. OEs are looking to us as a solution to a challenge they created. Others outside our industry are looking to it for guidance and education. Being a certified automotive recycler is being recognized as something of value outside the automotive recycling industry. eBay is making decisions on who can sell airbags on their platform based on our certification. There are organizations that only want to work with the ARA-certified recyclers because of the high level of environmental consciousness that certification merits. This year we will work to gain more endorsements for the program, which will give us the validation we deserve. Some doors are being opened that have always been closed to us. Now is the time to really focus on growing those relationships.

What is your perspective on the future of certification and the industry?

The automotive manufacturers need us. This shift to EVs has helped them look at us with a fresh perspective. We provide a service that no one else does. Can you imagine what would happen to ELVs if it wasn’t for us? The OEs certainly don’t want to be responsible for them. What we dismantle may change, the way we do it may change, but making sure we maintain our spot in the loop will be a focus for us not only this year, but for years to come.