Flashback: Award Worthy of the Honor 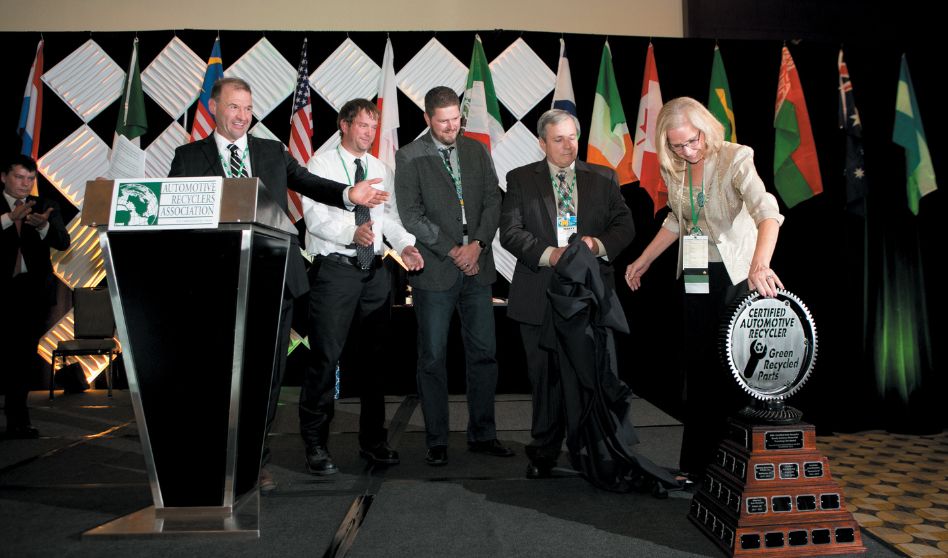 In this flashback photo from 2017, incoming ARA President Marty Hollingshead and Shannon Nordstrom, the chair of the ARA Certified Committee is seen presenting ARA and the Reitman family a retooled CAR “Gear” Award that now holds the names of all awardees. The award is displayed at the CAR Award recipient company for one year. It serves to show customers and employees that the business upholds the highest of safety and environmental standards, as well as proving leadership in these areas. Only one auto recycler per year is awarded this honor.

Here is the story. In 2015, Adam and Nick Reitman had the “gear” award (top part of trophy seen above) made to honor their father, late-past president Randy Reitman, who worked to promote the program in his time on the Executive Committee. He passed away just after his term, in March 2015.

Northlake Auto Recyclers, Hollingshead’s facility, received the CAR Award in 2016. As such, he displayed the CAR “Gear” Award for the year. Hollingshead had an idea that the “gear” needed a base, and the ability to display all those who have won this prestigious award. Inspired by his love of hockey, he sent a trophy-style award base design to ARA and they loved it. He had it produced, and in 2017, Hollingshead and Nordstrom presented the improved trophy to ARA and the Reitman family. The following year, Hollinghead was welcomed onto the Executive Committee and is now incoming president of ARA.

From left to right: Shannon Nordstrom, chair of the ARA Certification Committee and owner of Nordstrom’s Automotive shares the stage with Adam Reitman, Nick Reitman, Marty Hollingshead, owner of Northlake Auto Recyclers, and Fran Reitman, owner of Reitman Auto Parts to unveil the retooled Certified Automotive Recycler (CAR) “Gear” Award in 2017. Send your photo(s) as high resolution JPG format, along with a description or identification of the people/things included to ARAEditor@comcast.net